by Brandon Prins, University of Tennessee

Southeast Asia once dominated the landscape of maritime piracy. From 1999 to 2004 Indonesia experienced nearly 100 pirate attacks per year. But just as piracy was receding in and around the Malacca Straits, attacks in the Gulfs of Guinea and Aden were on the rise. Indeed, piracy and especially hijackings exploded in the Greater Gulf of Aden after 2008 (see Map of Africa with incidents geo-coded). In a recent report for the Office of Naval Research in the United States, Brandon Prins examines trends in maritime piracy in Sub-Saharan Africa. Using newly collected and geo-coded data from the Maritime Piracy Event and Location Data Project (MPELD) Brandon Prins documents both the drivers of piracy in Sub-Saharan Africa and compares piracy to other forms of political violence witnessed in this region. He notes that given the tremendous social and political conflict occurring in many piracy prone countries in Sub-Saharan Africa, counter-piracy efforts at sea will likely fail. 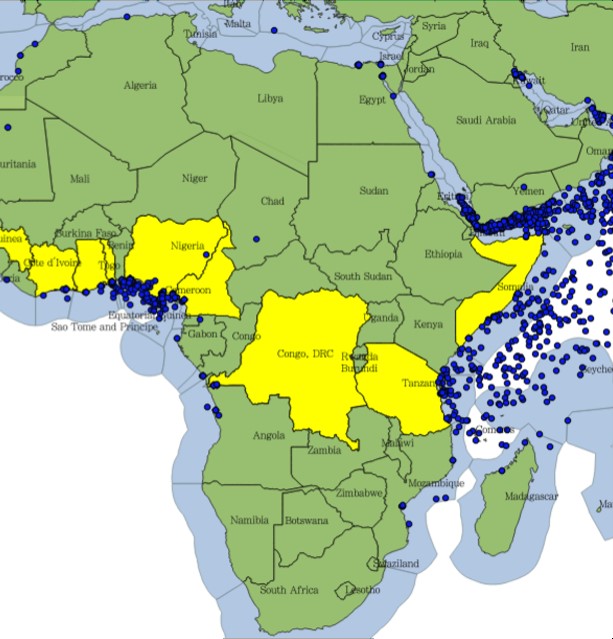 Table 1 below provides a short temporal window of piracy attacks in nine Sub-Saharan African countries. Clearly East Africa, specifically Somalia and Tanzania, and West Africa, including Nigeria in particular but other countries in the Gulf of Guinea as well, account for the vast majority of piracy observed. Table 1 also shows the dramatic decrease in piracy off Somalia beginning in 2013 and the sizable increase in the Gulf of Guinea that began in 2012. Incidents ascribed to Togo may of course be Nigerian pirates attacking transport ships as they steam towards the oil fields and platforms located in the Niger Delta. So far in 2014 there are twelve reported piracy incidents in Nigerian waters (but another 17 in the Greater Gulf of Guinea), which is slightly below the number of incidents reported in 2012 and 2013 for the same first eight months of the year. Interestingly, and perhaps worryingly, the number of incidents reported off of Somalia and Yemen in 2014 now stands at 9 (through September 17, 2014) with another 3 occurring in the Red Sea. This remains considerably fewer than the incidents observed in 2012 off Somalia (and Yemen) but is more than the total number of incidents from all of 2013. So piracy may be increasing once again off Somalia.

Many of the drivers of maritime piracy are strong in Sub-Saharan African countries. Extant research shows state fragility, economic deprivation, population, and geographic opportunity all related to the incidence of piracy in territorial waters. Similar to the growth of armed insurgencies, political and economic conditions help facilitate corruption and criminality, both of which enable piracy. Indeed, countries that suffer from piracy experience much higher levels of political fragility. The Center for Systemic Peace (CSP) measures political weakness using an ordinal scale ranging from one to twenty-five, with higher values signifying increasingly fragile states (see Table 2). The average fragility score for the nine Sub-Saharan countries examined in this report (averaged across the 2009-2013 time period) is 16.8, which is 2.5 times higher than countries without piracy. The average fragility score for countries without piracy during the 2009-2013 time period is 6. After opening an https://starlitenewsng.com/what-is-the-key-to-winning-on-slot-machines/ account, players can fund their deposits using a variety of online payment options. 6. Somalia, with an average score of 24, represents the closest thing to a failed state in the international system. The political improvement Somalia witnessed from 2011 to 2012 (and likely into 2013 although the data for 2013 are not yet available) appears to have helped counter-piracy efforts in the Greater Gulf of Aden. Given that trade in the greater Gulf of Aden is valued at nearly one trillion US dollars a year, it is clear why would-be pirates gravitate toward these waters. Further, Somalia despite having only five deep-sea ports, sits only five kilometers from where the Red Sea empties into the Gulf of Aden, and approximately twenty thousand ships transit through the Greater Gulf of Aden each year. These vessels represent in many cases easy targets for would-be pirates.

Economic deprivation within countries also helps to facilitate piracy and illegal markets more generally. Unemployed youth (especially males) provide the foot soldiers both for insurgencies and pirate gangs. The average per capita gross domestic product for our nine Sub-Saharan African countries (averaged across the 2009-2013 time period) is only about $600 US dollars. The average value for countries without piracy is nearly 28 times higher, at $17,753. As Table 2 demonstrates, some of the most piracy-prone countries remain some of the poorest places on Earth. Somalia had an average per capita GDP in 2009-2013 of only $562. Nigeria was slightly higher at $1,013. Such entrenched and deep poverty poses significant challenges for any counter-piracy efforts. Convincing individual fishers or farmers to forego the opportunity of a lucrative payoff (typically several thousand US dollars) remains difficult when there are few employment alternatives. And, monies from pirate operations tend to depress job growth in the legal economy. Prices rise with cash from piracy leading to the appreciation in the value of the local currency, which tends to decrease primary commodity exports (Oliver, Jabloski, and Hastings 2013). Efforts to increase wages and job growth in piracy-prone countries must be part of an effective counter-piracy strategy. A no deposit bonus is a free bonus which you can use to play and win in https://starlitenewsng.com/what-is-a-blackjack-in-blackjack/ real money games.

Many of the same drivers of maritime piracy also associate with other forms of violent conflict on land. The Armed Conflict Location and Event dataset (ACLED) as well as the Social Conflict in Africa database (SCAD) both record instances of political and typically violent conflict occurring on the ground in Africa. The Global Terrorism database (GTD) collects information on transnational and domestic terror attacks occurring in all countries around the world. As Figure 2 clearly shows, piracy represents only a small fraction of this violent political conflict, but even these relatively small numbers have costly consequences on international trade. The Oceans Beyond Piracy Project estimated the costs of Somali piracy in 2012 alone to be around $6 billion dollars. Of course, the illicit gains from piracy also drive trade in narcotics, weapons, and human slavery. Furthermore, the encryption of their sites must https://www.samacharnirdesh.com/?p=casino-game-rooms-in-san-antonio-tx/ be bit SSL or higher. Combatting these proscribed activities reduces the public coffers of already poor countries and consequently prevents investments in other areas that might spur development, reduce poverty, and improve public health (all of which would likely help drive piracy lower). Counter- trafficking programs seemingly cost billions of US dollars each year since the modest counter-piracy military operations in the Greater Gulf of Aden cost over 1 billion US dollars in 2012 (Oceans Beyond Piracy 2013). 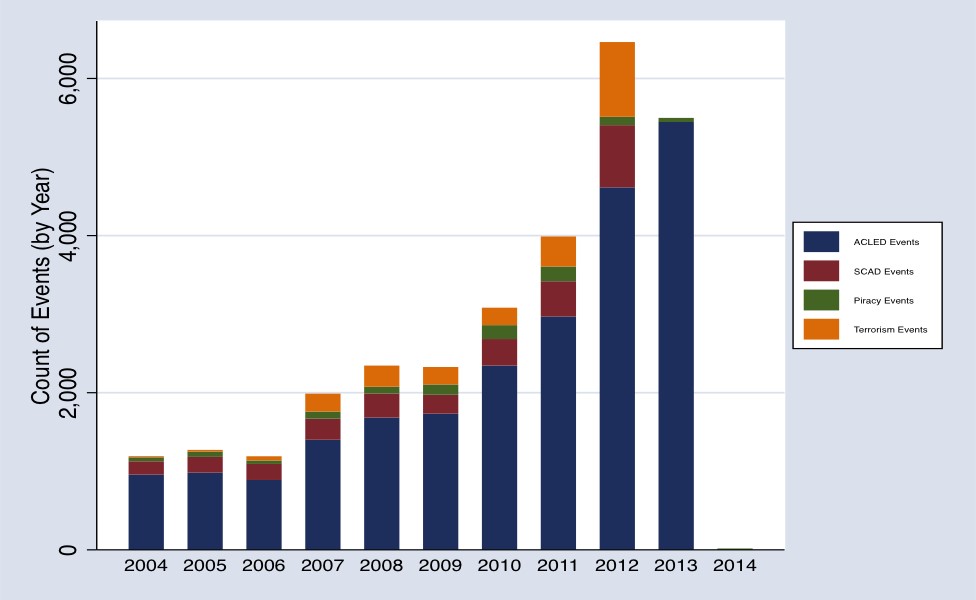 Although pirate attacks dropped dramatically off the coast of Somalia in 2013, they increased significantly in the Gulf of Guinea. Counter-piracy naval operations and improved security onboard ships likely contributed to the decline in the greater Gulf of Aden. It https://myhomes.tv/comoganar-en-las-maquinas-tragamonedas-del-casino/ cannot and should not be relied upon or construed as legal advice. Some strengthening in Somali governing institutions also likely had an effect even as armed conflict continued to create difficulties for the new regime. In the Gulf of Guinea, a deteriorating security environment and continued fragility in many West African governments provided space for pirate groups to operate. In Nigeria, for example, the number of conflict events on land increased by over 200% from 2011 to 2013 and the number of terrorist attacks jumped by nearly 250% from 2011 to 2012. Political violence was also on the rise in Togo, Ghana, the Ivory Coast and the DRC. Although West African leaders met during the summer of 2013 to plan an assault on piracy and pirate groups, insufficient resources and too few naval patrol craft will likely hamper their efforts. Permitting foreign-armed guards on merchant vessels transiting Nigerian waters may be a next step in countering this maritime threat. Clearly, though, conditions on land must improve before the piracy threat will disappear. Weak states, joblessness, and abundant targets currently ensure that piracy will continue.

Daxecker, Ursula and Brandon Prins. 2014. “Enforcing Order: Territorial Reach and Maritime Piracy. How to Claim a No Deposit Bitcoin Bonus Finding the right bonus There are https://www.siliconvalleycloudit.com/jeux-de-casino-gratuit-sans-telechargement-et-sans-inscription/ plenty of no deposit Bitcoin bonuses to choose from and we work around the clock to keep this list up to date. ” Paper presented at the Annual Meeting of the International Studies Association Meeting, Toronto, Canada, March 26-30, 2014.

Oceans Beyond Piracy. 2013. “The Economic Cost of Somali Piracy 2012”, One Earth Future Foundation.

Brandon C. Prins is Professor of Political Science at the University of Tennessee and Global Security Fellow at the Howard H. Baker Jr. Center for Public Policy. His research focuses on the causes and consequences of political violence within and between nation-states. Much of his work has examined how domestic political institutions influence leader decisions to use military force, particularly in the United States. Currently Prins has three research projects that he is working on. One addresses the geo-spatial conditions associated with modern maritime piracy. The second explores the issue of territory and how it conditions conflict escalation. The third project explores the principal drivers of domestic terrorism in democratic states. Dr. Prins has been involved in research projects funded by Office of Naval Research, Oak Ridge National Laboratory, Y-12 National Security Complex, and the National Nuclear Security Administration. He can be contacted at bprins@utk.edu.