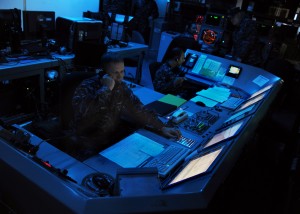 In a recent article in Contemporary Southeast Asia, Sam Bateman makes predictions about how the maritime environment of East Asia might evolve over the next decade. The article identifies three possible scenarios for the future, as well as the risks of a “strategic shock” that could interfere with predictions of the future. The objective is to assess the implications of current strategic trends for managing regional seas and activities within them. The scenarios offer alternative views of how the regional maritime environment might evolve: whether it will be much the same as at present (the status quo scenario); better than at present, more stable and with enhanced maritime cooperation to manage regional seas (the optimistic scenario); or worse than at present with greater instability, more competition, and low levels of maritime cooperation leading to further degradation of the marine environment and declining fish stocks (the pessimistic scenario). The article concludes with an argument that strengthening operational trust between the stakeholders and agencies involved is crucial to avoid the pessimistic scenario and to move the region toward the optimist scenario.

The continued rise of China’s economic and maritime power is the leading influence on the future maritime environment. All the long-term economic and strategic trends are going the way of China. Nevertheless, China is losing the “war of words” evident in regional strategic discourse that paints China as assertive and untrustworthy. A key issue is how China will react to this sentiment: whether it will soften its line, or dig in to a position as the regional “strong man”. Tensions between China and Japan are also growing with both countries seeing each other as acting assertively.

Sovereignty disputes over offshore islands in East Asia will continue as a major feature, if not a determinant of the regional maritime environment with few prospects of resolution. These are currently seen as zero-sum issues with a mind-set, inspired by nationalism, that they can only be settled by having a “winner” and a “loser”. This situation is not conducive for the development of effective cooperation for managing regional seas and activities within them.

Cooperation for many activities in regional seas is both an obligation and a necessity. The obligation to cooperate in managing maritime activities is frequently stated in the 1982 UN Convention on the Law of the Sea (UNCLOS), as well as in other international treaties. The necessity to cooperate flows from factors such as increasing shipping traffic, pressures on marine resources (both living and non-living), environmental degradations, and the need to avoid a “tragedy of the commons” (a ‘lose-lose’ outcome).

Effective cooperation is missing in East Asia at present due to a lack of trust both between major powers and neighbouring countries with sovereignty disputes, the lack of agreed maritime boundaries, the widespread commitment to independence and sovereignty, a lack of support for relevant international regimes (e.g. regional fisheries management arrangements), inadequate capacity, and the lack of a strong political framework to guide cooperation.

For the status quo to be maintained —and assuming the continued rise of China in all its dimensions— some power-sharing arrangement must evolve between the United States and China. To prevent spiralling downwards to the pessimistic scenario, both the United States and China, and to some extent Japan, will have to modify their existing policies. Washington must make its current policies less ambiguous, including by emphasizing defensive rather than offensive concepts, and being more sensitive in its support for regional countries. In turn, Beijing should slow down its military growth and pursue more accommodating policies in regional seas. Japan should avoid any indications of a return to militarism and be more restrained in supporting the potential adversaries of China in the South China Sea.

Few maritime disputes in the region will be resolved satisfactorily. Cooperation in managing regional seas and their resources will remain inadequate with a consequent increase in problems of declining fish stocks and increased degradation of the marine environment. The region will continue to pay relatively little attention to environmental, human and food security other than in rhetorical terms, but energy security will be an ongoing concern with risks of intensifying competition for offshore oil and gas.

Achievement of an optimistic scenario is dependent on a higher level of strategic trust in the region. This requires a marked shift in mind-set for all stakeholders from one of competition to one of cooperation. It involves the major stakeholders —China, India, Japan and the United States— finding common ground in their strategic interests and “backing off” from current adversarial and competitive positions. This may require giving China more influence and the United States stepping back from its efforts to maintain its role as the dominant player in regional affairs. Specifically, in terms of policy, Washington would have to shift away from the military dimensions of rebalancing, including military support for protagonists in the sovereignty disputes, and focus more on its diplomatic and economic dimensions.

The optimistic scenario would lead to the peaceful development of regional oceans and seas and the establishment of good order at sea, including an enhanced role for coast guards in facilitating the necessary cooperation. The setting aside of disputes, the pursuit of cooperation and a focus on dispute management rather than dispute settlement would result in a “win-win” outcome for the region. To some extent, such an outcome will involve conceding a degree of regional leadership to China.

With the pessimistic scenario, the United States will seek to maintain its strategic domination of the region, but it is unlikely that China will continue to accept American primacy. It will be a period of competing strategic concepts with China continuing to develop denial access capabilities while the United States focuses on offensively-oriented concepts to assert access. However, China with its growing military power and advantage of geographical proximity, is unlikely to be intimidated by aggressive American military responses. These only add to the security dilemma for both Washington and Beijing. Recent developments in the South China Sea increase the risks of the pessimistic scenario eventuating.

The pessimistic scenario will be a difficult time for regional nations. They will tend to fall within either an American or Chinese “camp”. Regional defence spending will increase significantly. Overall the regional maritime environment will become increasingly anarchic and beyond the ability of exiting regional institutions to control. There will be increased risks of a naval arms race; incidents at sea will increase; and measures to manage them will be ineffective. Sovereignty disputes will not be resolved with a marked lack of maritime cooperation to provide good order at sea leading to a collapse of regional fish stocks, serious marine pollution and further destruction of marine habitats.

The future is inherently uncertain and attempts to predict the future often prove wrong. Recent examples of “strategic shocks” include the September 11, 2001 terrorist attacks and the Global Financial Crisis. Dealing with the risks of these shocks is aggravated by the fact that intelligence services in the past have failed to predict many of these events. Entirely unpredictable natural disasters, such as the catastrophic 2004 Indian Ocean Tsunami, can have similar outcomes to those of man-made strategic shocks. Possible strategic shocks include another serious regional economic downturn; a major terrorist incident; the outbreak of a contagious disease spreading uncontrollably across the region; or a gigantic catastrophic natural disaster, such as a massive volcanic eruption in Indonesia. Any breakdown of government in China could develop into a strategic shock for the region.

The concluding part of this article addresses the question whether there are any factors that improve the prospects of achieving the optimistic scenario? Major needs include greater strategic trust and more effective management of regional maritime concerns.

Trust (or the belief that the other side “will do what is right”) is a key consideration. However, trust is a difficult concept that means different things to different people and in different contexts. This is evident in the question as to what comes first between trust and cooperation. While cooperation to deal with “softer” issues, such as search and rescue, fisheries management, marine scientific research and marine environmental protection, should help build trust, a prevalent regional view is that even this cooperation cannot proceed without strategic trust.

Strategic distrust is most evident between China and the United States. Both sides are seeking to achieve their long term goals at the expense of the other. Rising tensions and competition in the bilateral relationship are due to misperceptions and miscommunications on both sides. China views the American rebalance as ill-disguised containment, while many in the United States see China’s actions as an attempt to drive the United States from the Western Pacific. These perceptions are compounded by other bilateral problems, such as American arms sales to Taiwan, allegations of currency manipulation and cyber espionage, and varying positions on North Korea. Chinese President Xi Jinping has proposed solving the problem of the lack of strategic trust through “a new form of major power relationship”, but this idea remains undefined.

Washington has tried to walk a fine line between maintaining neutrality in the sovereignty disputes while also trying to play some role in resolving the disputes and providing support for its allies. This policy has provoked greater assertiveness from China leading to a vicious circle with the United States in its responses, furthering the impression that it has taken sides.

The solution to this dilemma may be to consider trust at different levels. While strategic distrust, particularly between China and the United States and Japan, is the most serious problem, operational distrust restricts the cooperation necessary to deal with issues, such as marine pollution, fisheries incidents, and border clashes. Operational trust is a requirement for the entire region but currently is conflated with strategic trust, the lack of which has become the main obstacle to effective maritime cooperation.

The region desperately needs a more cooperative mind-set. The current mind-set is more towards independence and sovereignty with “winners” and “losers” rather than towards “win-win” outcomes. Maritime cooperation is not just something nice to have — it is both an obligation and a necessity. Without cooperation, border disputes will increase, fisheries will be over-fished, marine habitats destroyed, and littoral countries will lack the scientific knowledge required to manage and develop their maritime interests. Unfortunately even these “softer” environmental, safety and resource management issues have been politicized and caught up in the current levels of strategic distrust.

The challenge is how to build maritime cooperation in the absence of resolution of the sovereignty disputes and the presence of strategic distrust? A possible way ahead is to build operational trust by disconnecting forms of maritime cooperation on the “softer” issues from the military and political issues that underpin strategic distrust. Basically this will mean a better framework for managing maritime cooperation and “demilitarizing” disputed maritime areas with civil agency patrol (“coast guard”) vessels preferred for law enforcement and other cooperative activities, as well as a conscious effort to limit naval operations and exercises in or near disputed waters.

Dr Sam Bateman is a Professorial Research Fellow at the Australian National Centre for  Ocean Resources and Security (ANCORS), University of Wollongong, NSW 2522, Australia (email address: sbateman@uow.edu.au), and currently also Adviser to the Maritime Security Programme at the Institute of Defence and Strategic Studies (IDSS) in Singapore (email address: issambateman@ntu.edu.sg).