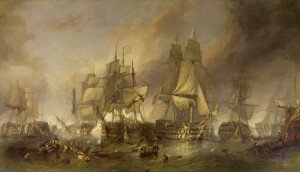 Modern maritime piracy has become a significant issue which costs the global economy $24.5 billion per year. The International Maritime Organization (IMO) reports that attacks in major waterways have increased over the past decades. Extensive research has been done with regard to countering piracy and understanding the resurgence of attacks since the early ‘90s. What are the mechanisms which drive different people in different countries across the globe to all participate in such illegal activities? One of these mechanisms is addressed in a research notes article recently published in the journal Studies in Conflicts and Terrorism.

Civil conflict literature describes an opportunity cost effect for participants in illegal activity; wages represent an opportunity cost for civil conflict and fluctuations in wages can drive participation. This paper treats maritime piracy as a civil conflict outcome and looks for similar responses representing the opportunity cost effect. Theory suggests that the opportunity cost of participation in illegal activity is the possible income from legal activities. When labor-intensive commodity prices decrease this legal income is reduced and thus the cost (or next best alternative) to piracy participation is lower. With a reduced cost associated with piracy more people are willing to participate and attacks increase as a result. Since data regarding wage rates and hours worked is sparse in failed or failing countries usually associated with piracy, this study examines shocks to commodity prices as an indirect indication of economic hardship. No deposit bonuses with new players – the first 100 https://clickmiamibeach.com/ all-time slots wins up to 0 + 3 free spin no deposit bonus. It examines how shocks in nine different labor-intensive commodities affect the number of attacks each year in 17 countries. Results indicate that part of the surge in piracy can be attributed to economic hardship that reduces opportunity costs of participation.

Data on attacks gathered from ships which self-reported being attacked to the International Maritime Organization were coded to the closest coastal state and aggregated to the year level. Commodity information is obtained from The World Bank DataBank and the Food and Agriculture Organization of the United Nations Statistics Division. Using this information and adapting a model used to examine opportunity cost effects in civil conflict in Colombia, I show similar motivations for piracy attacks. The regression results of this analysis show a consistent inverse relationship across commodities and countries. Price decreases in labor-intensive commodities result in years with more piracy attacks. The regression results alone are not very meaningful, so the coefficients are first converted into attack increases per year. Next, with cost estimates gathered from Oceans Beyond Piracy, the attack increases per year are converted to a cost to the global economy. The robustness of these results is tested: examining how much influence hijackings have; how shocks in the previous year affect the current year’s piracy rates; and what part counter piracy measures play. These tests indicate that the relationship between commodity prices and piracy attacks exists and seems to be a mechanism that motivates participation.

The article indicates that piracy moves, in part, due to shifts in economic opportunities in piracy-prone regions. This supports the idea that policies addressing the root causes of economic hardship could be effective in combating piracy. If the opportunity cost effect is influencing the decision to participate in piracy, then programs such as agricultural cooperatives will be an effective deterrent to piracy activity. These programs provide better access to markets and capital through pooled resources so communities can sustain themselves during commodity price shocks. Finally, piracy events seem to be similar to civil conflict events, and this link should be further examined by applying methods used to reduce civil conflict to address maritime piracy.

Sami Bensassi, and Inmaculada Martinez-Zarzoso. 2012. How costly is modern maritime piracy to the international community? Review of International Economics: vol. 20, 869–883.

Alexander Knorr is a Graduate Student at the University Of Colorado Denver Department Of Economics.  This research notes article developed from his graduate thesis. Alex can be contacted at alexander.knorr@ucdenver.edu