Pakistan is one of the frontier countries in the fight against piracy. Piracy incidents have come closer and closer to the coast of Pakistan. The Pakistani navy is the only regional navy which has taken a lead role in the international missions in the Gulf of Aden in commanding the Combined Task Forces 151 twice. Moreover, Pakistani citizens have increasingly become victims of piracy. This includes seafarers as well as fishermen. An international conference held in February 2012 in Karachi took up the challenge to reflect on the importance of Pakistan in counter-piracy and to develop ideas for how counter-piracy can be improved on a national as well as international level.

The three day conference under the theme of “The Human Face of Marine Piracy. Consequences & Policy Options” focused on the question of how the victims of piracy can be better assisted and which policies need to be developed. The conference which was attended by a wide range of Pakistani and international stakeholders was organized by two leading Pakistani institutions in the field of human rights, the Fazaldad Human Rights Institute, and maritime policy, Bahria University’s National Centre for Maritime Policy Research, together with two international partners (Dalhousie University, Canada, and the National Defence University, USA).

The human face of piracy: The MV Suez and the Al Imran

How intricate the humanitarian challenges of piracy are, is best highlighted by two recent piracy cases involving Pakistani nationals, the case of the MV Suez and of the fishing vessel Al Imram.

The MV Suez, an Egyptian owned bulk carrier transporting coal, was attacked by pirates on August 2nd 2010 while waiting within the International Recommended Transit Corridor to join a convoy. Under heavy fire from automatic weapons the crew managed to defend themselves for about an hour and then surrendered to the pirates. The ship was taken to the Somali coast near Grath. When the pirates formulated the first ransom demands the drama of the MV Suez unfolded, since the owner lacked appropriate insurance and was not willing to pay any ransoms. After eight months of unsuccessful negotiations the crew became increasingly the subject of violence. As reported by the Captain Wasi Hasan, crew members were beaten, stabbed and even shot at. Since the vessel owner showed no sign of paying ransoms, the Captain saw the only possibility in reaching out to his family to work towards his release. The family contacted the Pakistani NGO CPLC which started the ransom negotiations with the pirates. To collect the ransom a public media campaign was launched with Captain Wasi’s daughter 11 year old Laila Wasi as its public face. During the campaign to collect the negotiated ransom of 2.1. million dollar, Wasi’s daughter even announced in television that she will sell her kidney in order to release her father.

The ransom was successfully collected through public donations and the assistance of several welfare trusts. In June 2011, after an 11 month hostage period the crew and the vessel was released. Yet, no further precautions were taken to protect the vessel and the vessel was attacked by pirates again within a few days after its release. The crew, however, successfully managed to defend themselves. Yet, the vessel faced technical difficulties and ran out of fuel. Fortunately the Pakistani navy came to support the vessel. The crew abandoned the MV Suez and was brought to Karachi onboard a Pakistani navy vessel. In Karachi the crew was welcomed by several Pakistani officials. Today, the crew members still suffer from the injuries and the stress of the hostage period.

The case of the Al Imran reveals another piracy caused tragedy. The case received coverage through an article in the German newspaper DIE ZEIT. Its author, Wolfgang Bauer, had a major role in releasing the hostages The Al Imran was a small, 14 meter, fishing vessel from the Pakistani village of Piskhan.

While fishing in the Indian Ocean the vessel was hijacked by pirates in February 2011. Taken to the Somali coast the crew, 11 fishermen, were locked in the vessels storage room of 6 sqm without any sanitary facilities. The pirates demanded a ransom of 300.000 USD from the family of the fishermen. Yet, the families, poor fishermen after all, were unable to come nowhere near such an amount. After an eight month hostage period the Al Imran sank. While the
Both cases reveal the humanitarian tragedies behind contemporary piracy. Cases such as these rarely make the international headlines. Yet, it is exactly in such cases – where vessels do not have insurance, where no professional kidnap and ransom team is ready to handle the issue and no company provides assistance to the traumatized crew members and income to their families during a hostage period and after – where more support is needed and better policies are required. The case of the MV Suez and the Al Imran are not isolated incidents, they happen on a frequent basis. Compared to the unknown sailors and fishermen which have become victims of piracy, the sailors of the MV Suez and the fishermen of the Al Imran, despite all their suffering, were fortunate: they received assistance and their cases where covered by the media. Yet, their histories provides a major lesson, that more assistance is required for those seamen who slip beyond the grid of the professionalized, insurance run kidnap and ransom business of contemporary Somali piracy. Seafarers left without assistance, families left without income. crew members were rescued by the pirates, having no further use for them, they were taken to the Somali coast and left abandoned. Left on a largely uninhabited coast strip, the crew only survived because local Somali fisherman assisted them with rice and water. After a month one of the local Somali travelled to Adado to call the local administration for assistance, The Pakistani fishermen were picked up and brought to the city. Arriving in Adado the odyssey of the Al Imran crew was not over yet. The local administration lacked the means to bring the Pakistani’s to Nairobi, where the nearest Pakistani embassy is located. It was only after they received support from the German journalist, that it became possible to arrange travel first to Nairobi and then further back to Karachi. In contrast to the crew of the MV Suez, however, the crew of the Al Imran did not receive a warm welcome, but had to go to administrative procedures, including a time spend in a Karachi jail, before they finally were released and could travel back to their families. 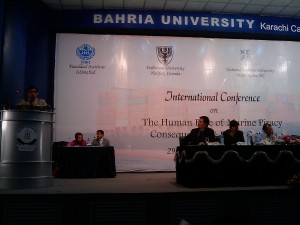 The 2012 Karachi Conference took up the challenge to develop better responses to the humanitarian challenge of contemporary piracy. The organizing institutes were very successful in bringing together different representatives of organizations which have a major role in counter piracy. This included a representative from the CPLC who had negotiated the release of the MV Suez, representatives of the Pakistan navy, including its Chief of Staff, of the Pakistani coast guard, the Maritime Security Agency, as well as representatives from the insurance and shipping industry. Also victims of piracy were given a voice: Captain Wasi of the MV Suez participated as well as representatives of fishermen. The program was complemented through experts from Pakistan’s neighboring countries, including China, India and Bangladesh, faculty of Bahria University’s Institute of Psychology, as well as international experts in counter-piracy from the International Maritime Bureau, Canada, the US and the UK. The conference was conducted in plenary sessions as well as working groups, focusing on the role of industry, legal developments, ransom negotiations, the welfare of seafarers and the impact of piracy on families and communities. The conference provided a well organized and productive environment in which not only different viewpoints on how the humanitarian challenges can be better addressed were exchanged, but also a number of concrete proposals and initiatives were developed. Proposals which were discussed extensively included the following ones:

These outcomes of the conference highlight that more can be done to cope with the humanitarian challenges of piracy and that counter-piracy policies can be significantly improved in integrating humanitarian concerns. Rightfully the conference results allow for some optimism that the situation of seafarers and fishermen might improve in the near future. While such proposals will not reduce the level of piracy – indeed the cynic might argue that they lead to a further normalization and institutionalization of piracy – they are important steps in assisting the main victims of piracy and centering the future development of counter-piracy policies on the weakest, the seafarers, fishermen and their families.

The Karachi conference documents well how important it is that countries affected by piracy develop national forums in which stakeholders come together, build trust and confidence among each other, and work towards implementing better policies. The conference in this sense provides a role model, or best practice, for how other countries may want to develop such forums.

In summary, it is two core lessons to be learned from the Karachi conference: Firstly, more can be done to address the humanitarian challenge of piracy. Secondly, national multi-stakeholder forums are crucial devices by which to improve counter-piracy.

is the research portal for the study of maritime security and ocean governance. It publishes commentaries based on academic research. It also acts as key repository of academic literature on the subject. It was operative from 2010 to 2017.